Baby bear’s space party was a lot of fun. She only wanted to invite three girls – unusual for her – it was the first year no boys were invited. I guess the times are a changin’. So what to do with four 11-year-old girls for three hours? First up, get out some nervous energy with a game of space soccer. A white balloon on the trampoline – ingenious!

Next, was the Jelly Bean on the Moon game. This involves filling a bowl with flour and carefully turning it upside down to create your half moon. Then you put your proud jelly baby on top. Next you go round the circle and everyone carefully spoons away some ‘moon’ trying not to topple the jelly baby. The first one to knock the jelly baby off the moon gets to eat him. The results looked like this… 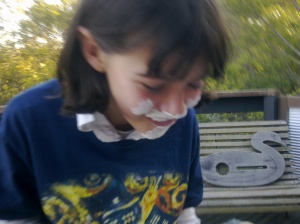 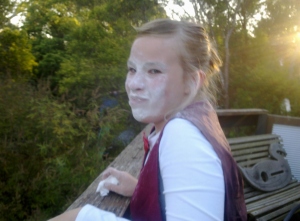 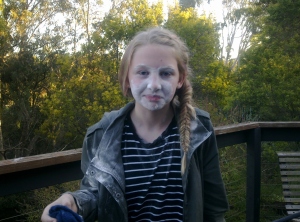 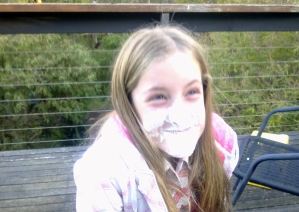 The funny thing was, after the first ‘go’, the girls just deliberately made the Jelly Baby fall off the moon so they could have a go at sticking their heads in the flour. Suffice to say there was a lot of laughing – and I’m glad to report there were no serious injuries. Parents, be wary of players who like to ‘help’ their next-door-neighbour get their face in the flour!

Next we played a variation of the Chocolate Game – you know, the one where you go round the circle spinning a dice and whoever gets a six, gets to eat as much chocolate with a knife and fork as they can before the next person spins a six. We used ‘Jammy Dodgers’ – the Doctor’s favourite food.

After that, Baby Bear continued with her mission to inDOCTORrinate her friends by sitting them down in front of Doctor Who with pizza. She chose the Adipose episode and we had marshmallows of different shapes on hand so the kids could make baby Adipose. But we decided – after the Tardis cake and everything – that perhaps enough sugar had been consumed and so the Adipose didn’t materialise. A pity – they’re kind of cute! 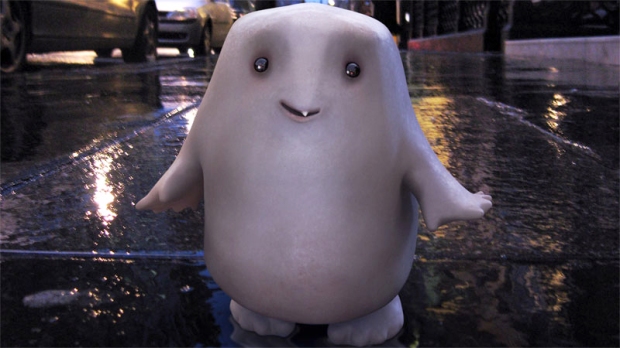 2 thoughts on “The Space Party”